Predicting changes in search can be hit or miss. Google changes its algorithm hundreds of times per year and the internet in general typically moves at light speed. However, although we know the internet rests on shifting sands, here are our SEO predictions for 2017.

1. Voice search will have little impact on SEO

Voice search will have little impact this year on SEO as it relates to informational and buying-intent queries. We wanted to address this up front, because it’s a popular topic and a lot of SEO experts are talking about it, partly because of the rise of virtual assistants like Siri and Cortana and the fact that voice search has gotten a heck of a lot better since the early days of text-to-speech programs.

Amazon has already sold 5 million of its popular Echo voice-activated devices as of 2016 and the demand for them is only growing. Google has also made significant strides in machine learning that complement voice search very well (about 20% of searches on its mobile app are voice searches). The company also has its own product (Google Home) to compete with Amazon’s Echo. Moz predicts that voice search will comprise more than 25% of all US Google searches (based on Android and App data).

We certainly see that happening, but that information should be put into context. Many of those searches are command prompts and not traditional queries. In other words, people are using the Android app to say “call Billy” or “record a voice memo” – search activity that has little to do with the SEO that lawyers care about.

The takeaway (and something that has been nagging at us for a while) is that search strategies could be affected by the differences in how people use voice search as opposed to manually typing out queries.

Pundits say that 2017 will be the year that voice search makes a real dent in more traditional methods of searching the web.

The reality is that voice recognition technology isn’t “there” yet. In even slightly noisy environments, machines still can’t determine who they should be listening to. Phrases often get jumbled, machines have a hard time understanding different accents and the overall user experience just isn’t seamless.  Short commands are typically flawless, but longer strings or searches for more complicated information are still better done using keys and a screen.

In a few years, after the technology catches up, it’s possible that search could dramatically change. But until then, people are more likely to type in a quick search than to seek out a quiet room, far from prying eyes, where they can perfectly enunciate their request.

2. We will see a decline in snake-oil SEO providers

Lawyers in 2017 are facing a conundrum. It’s becoming increasingly obvious that SEO is crucial for their firms since their firms rely heavily on consumers who use the internet to find local legal services.

These same lawyers are also well aware of all the snake-oil companies out there that promise SEO salvation and don’t deliver (maybe these lawyers have been burned before). SEO and digital marketing, in general, have been around for a while now and firms are getting more education about SEO and learning about shoddy or unethical service providers. When attorneys do decide to place trust in an agency, they’re hyper-aware of the fact that they need to see a return on their investment.

It doesn’t necessarily have to be a monetary ROI, either. Firms want to hold their SEO agencies accountable for progress, reporting and deliverables that relate to the services they’re buying.

Google’s user base increasingly comprises mobile users. In summer 2016, it was reported that well over half of the searches performed on Google originated on a mobile device. The AMP (Accelerated Mobile Page) rollout mirrors some of Google’s other feature rollouts that eventually ended up as ranking signals. 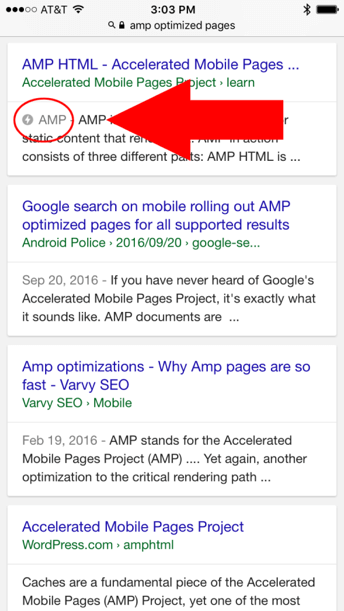 For example, Google promoted a secure browsing experience via https before making it a full-blown rankings signal. The same thing happened with mobile friendliness. It started as a strong suggestion and morphed into a requirement to rank well.

From Google’s perspective, making AMP pages a ranking signal makes perfect sense. Searches via mobile devices are only going to increase, making the user experience on those devices much more integral to Google’s continued success in search. Currently, non-AMP pages take several seconds to load. In contrast, AMP pages have a mean load time of less than a second.

If you’ve ever accessed an AMP page from search results, you’ll notice the difference. They load lightning-fast. Even ad and content-heavy news sites load extremely quickly compared to static pages with only a little content and no ads.

If you haven’t already noticed, Google often tries to answer questions without sending users to a website. They do that by pulling snippets of content from a web page and displaying it at the top of the search results.

This doesn’t always happen, but it’s pretty common when you type in questions or have a query related to a set of instructions. Stone Temple Consulting studied these snippets and showed that their presence doubled between 2014 and 2016.

Structured data is HTML markup that website owners can add to their site to make their content machine understandable.  It enables search engines to understand the relationships among different pieces of content and how they can be important to one another.

View all articles by Chris Dreyer.

Thanks for tips 3 and 4 - I was totally unaware.